"Taming the West, two hearts at a time" 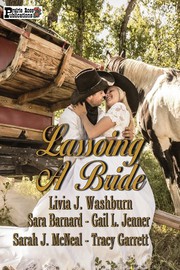 NO LESS THAN FOREVER by Tracy Garrett

Doctor Franz Bittner is satisfied with his life as it is. He has a good practice in a place where he is respected, in spite of his German birth. He has good friends and enough income to provide with him a few comforts. A wife would only complicate things. Then a tiny blond stranger is pulled from the river and everything changes. With one smile she captures his attention—and steals his heart.

Rebekah Snow Redmann barely survived her abusive husband's attack. Though she was given to him to pay her father's debts, she'd rather die than go back. Then she ends up in the care of the handsome local doctor and he stitches up more than her wounds—he mends her soul. With him, she discovers everything that she believes she can never have...a love that will last forever. 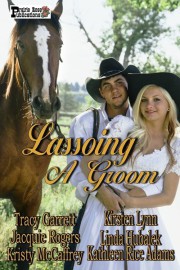 WANTED: THE SHERIFF by Tracy Garrett

Martha Bittner may be considered a spinster at twenty-seven, but she's not planning to stay that way. For four years, she's wanted the sheriff of River's Bend, Missouri, to notice her as more than a friend and a really good cook. With the first annual spring dance only weeks away, Martha decides to announce her intentions—and declares the sheriff a wanted man.

Sheriff Matthew Tate always thought he was better off a bachelor. Growing up in Boston society, where marriage is a business transaction and wealth his greatest asset, he's learned to distrust all women's intentions. None of them even catch his eye anymore—until pretty Martha Bittner tells him exactly what she wants... and he wonders why he ever resisted capture. 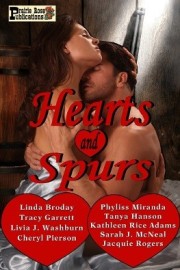 Former U.S. Marshal Jericho Hawken should have been shepherding a wagon train to new territory, but he unwillingly left them vulnerable to a vicious raider. The murder of the settlers he was supposed to be guarding is the hardest thing he’s ever had to face…until he meets the sister of one of the settlers.

…meets a woman who has lost everything…

Instead of a joyous reunion with her brother, Maryland Henry has come to River’s Bend to take responsibility for her three orphaned nieces. Fired from her teaching position and with no other family on whom to rely, Mary believes Jericho Hawken is responsible for all her woes. Or is he what she’s been searching for all along?

It’ll take a lot of forgiveness and a few fireworks to realize that together their dreams can come true. 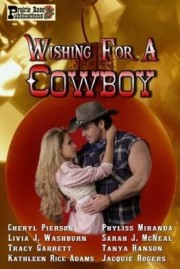 HER CHRISTMAS WISH by Tracy Garrett

Her only wish for Christmas was the man who left her behind.

Even a woman capable of living on her own…

Kathryn McConnell is a widow celebrating a milestone birthday alone. Though she feels a woman should be able to mourn the passing of her thirtieth birthday any way she wants, she won’t turn away a cowboy in need of lodging—until she learns it’s the man she’d expected to marry thirteen years earlier.

Will O’Brien had challenged his father’s prejudice against the woman he loved only to discover he was unable to stand against his family’s wealth and connections. Without a way to support his bride, Will struck out for the west, determined to earn a living for them both. When he returned after two years with no word from Katie, he found she’d married another and moved away. Heartbroken, he returns to his work, but never stops hoping to find her.

When chance lands Will at the remote stagecoach station run by the widowed Kathryn, he grabs at the opportunity he’s been handed, hoping to win back the only woman he has ever loved.

"Tracy Garrett...writes westerns just the way they should be written, with sexy cowboys and the strong independent cowgirls who love them." --Sandy M., The Good, The Bad, and The Unread 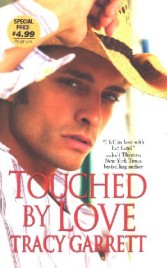 Jaret Walker is a loner, a gun for hire with a heart of ice. He's never had anyone to call his own, and he likes it that way. But when a promise made to a friend leads him on a ride through the desert and to remote Two Roses Ranch where he meets Isabel Bennett, the woman he's supposed to protect, all he can think of is making her his. She's the kind of woman a rough-riding cowboy like him can never have. But her hot gaze tempts him like no other woman has before...

The moment Isabel Bennett lays eyes on Jaret Walker, she remembers the dreams she's denied for so long. She's sworn never to marry. It's the only way to protect her ranch. But when Walker rides into her life, she decides to let herself taste what she's giving up—a passion that burns through her with each kiss—and a desire that won't be denied... 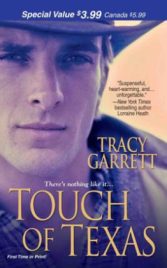 RE-RELEASED AS TEXAS GOLD
A blizzard blows Texas Ranger Jake McCain to Rachel Hudson's cabin and trouble is right behind him. He's badly wounded. Taking care of him is the right thing to do, but she knows the local gossips won't see it that way. Suddenly, everything Rachel's fought for is at stake - and the past she'd hoped to escape looms over her future. Still and all, when Jake turns his dark gaze on her, all she wants is his strong, seductive touch...Jake McCain has never stayed in one place. A home and a family aren't for the likes of a man accustomed to the rough life of the trail. But when he sees the trouble she's in, he can't leave her behind. Not when her innocent kisses burn straight into his soul, and the sight of her smile is the only bounty he cares to collect...